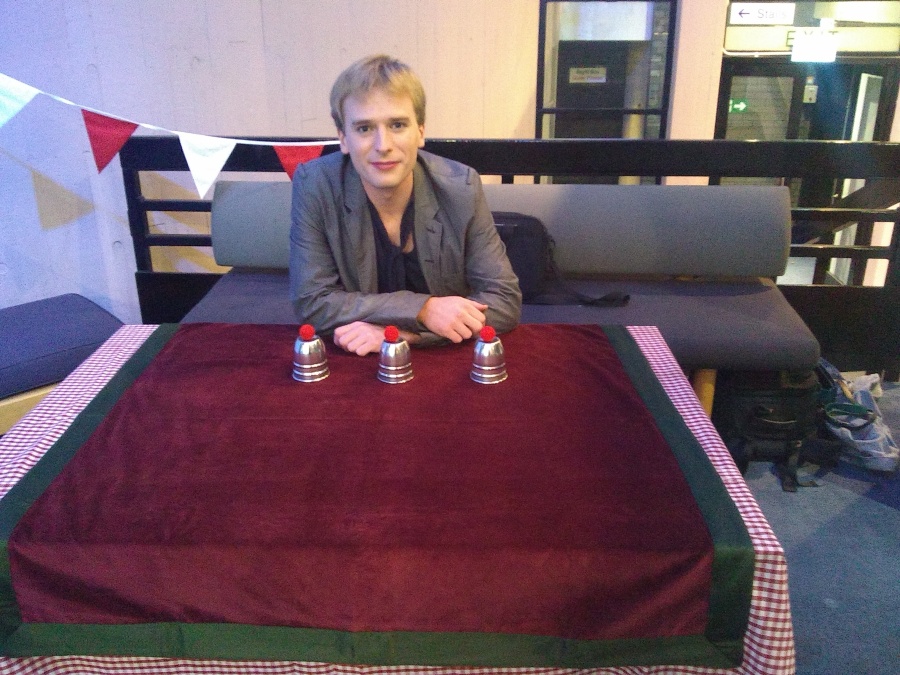 Last night I was involved in the Fringe event for A Quite Enormous Poetry Night organised by Ben Norris for National Poetry Day, showcasing a whole host of the UKs best poets. It was an incredible night. The theme of the event was truth and I was involved as part of the entertainment through Nottingham Playhouse before the show as a magician. Well, not a magician. But doing magic tricks. Or else, exploring visibility and invisibility. It’s a section from my latest show, Fitting, which is about non-binary gender, cross dressing, appearance, disappearance. . . and magic.

The excerpt I was performing is a cup and ball trick accompanied by a spoken piece of text looking at how wearing different clothes can make me feel more visible, or more invisible . . . and how both, alternately, can sometimes feel called for. It’s one of the first pieces I wrote for the show and kind of sums up the heart of it for me.

Getting into learning some magic has been an interesting process for me (I’m not the most dextrous of people!) and last night, sitting at a stall, performing again and again for whoever was passing by and interested in what I was doing was the most full on learning experience I’ve had with it yet. It turns out doing magic close up like that repeatedly is entirely different from doing it on stage as part of a theatre show. In the same way, perhaps, that working jokes into a poetry set feels different from performing stand up comedy. There’s a different set of expectations.

There’s something lovely though, when it works well, about the moments of shock and amusement you can create for people with the simplest tricks. It feels childlike. Innocent. Despite being centred around essentially lying. And at the same time, finding truth. I’m looking forward to getting better and better at them as the tour of the show begins and continues.

Speaking of visibility and invisibility, I’m just starting to feel the onset of the year’s first winter blues, and feeling the compulsion to hibernate. Which will be interesting when set against touring. Hoping that being busy and on the road will help keep me pushing forward. Hope to see you out there.

Here’s the text from the show that sits against the trick:

Sometimes it feels risky being visible.

Sometimes it feels risky being invisible.

Did I just say the same thing twice?

When I’m wearing those clothes, I often feel more visible.

Sometimes, I’m not wearing those clothes, but I want to be visible.

And that’s frustrating, but I can live with it.

Sometimes, I am wearing those clothes and I want to be visible.

And that’s great. I think that people should want to be more visible.

Sometimes, I’m not wearing those clothes, and, actually, I want to be invisible.

And those days are difficult, but it’s OK, because it feels like I am. Invisible.

Sometimes, I am wearing those clothes, and all of a sudden,

I want to be invisible.

Sometimes in the morning, when I’m lying in bed,

whether I’m going to want to be visible, or invisible.

And then there’s a risk of finding out.

Sometimes in the afternoon when I’m lying in bed,

whether I’m going to want to be visible, or invisible.

And then there’s the risk of having to do something about it.